By Admin 8 months ago 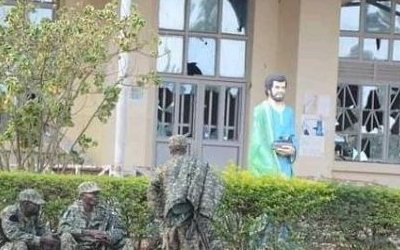 632 views
Following the destruction and damages of school properties and staff quarters By the students, the school has completely been sealed off and every students has been ordered and chased out of the school. This comes after one of student of St Joseph's college ombachi was found Dead and lied in blood clot in the bus, it's understood that on 4th March 2022 the students had gone for a friendly outing to koboko and maracha respectively. However unclear reports States that the body of senior 4 student "Adnan" was just found lying in the Cold blood in the bus with which the students were traveling. No clear information has been obtained so far though some people say the deceased was beaten by fellow students and others say he was involved in an accident before,. However, out of anger last night the students engaged in a serious strike demanding for the proper causes of the death of their fellow students Hence ended up destroying school properties and teachers quarters which has now led to total close up of the school
Comments 0
No comments found
Leave a comment

Another shade of uneas... 16 hours ago