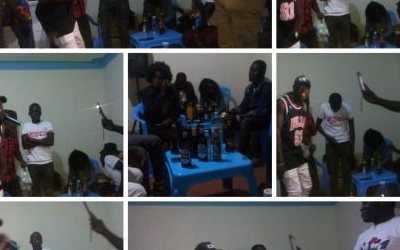 1,473 views
Ever heard of A-city music?The answer should definitely be a yes if you are within Arua City. I'd bet 20k if you are within the city and claim never to have heard about these guys.These guys have been all over tonetouch music's news desk making news that's not in anyway next to music.We were just at the verge of believing that these guys were under a spell, but their story has turned from villain to hero overnight.It seems that yesterday was a very memorable day for the A-city crew members as their music has began to pay off in a huge manner.The crew members led by their president Raddy Zicky were surprised by their number one fan, manager Ray who called them at Oluodri and treated them to a sumptuous meal which none of them will forget decades to come there after.The best part of it all is that other fans like Freddo manager, Charles and other high profile fans were all in attendance and praise of A-City crew's music.These guys really got not just an opportunity but also a blessing as such way of appreciating talent is of a rare type in our region.Congratulations guys keep on with the positive vibes for such and better surprises in future.
Comments 0
No comments found
Leave a comment